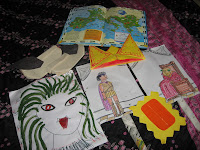 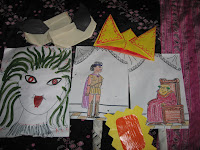 Have you ever told the same story 7 times to 7 different groups of children? I have, and will have to every Monday for the next 3 to 4 months! I am filling in for a friend who wants a break from storytelling at a school near my place. She has been doing this for 4 years now!.Amazing.
So for my first story, I planned to do, Perseus from the Greek heroes myths. Story is great, right elements of heroism, monsters and magic so children should like it, and I was not wrong on that. I made simple drawings and in my signature style , converted them into stick puppets for use in the class. I made a good looking paper helmet of Invisibility, a Shield, and a pair of paper Sandals with wings to fly.
The children loved the props, and especially got a lot of compliments for my rendition of Perseus. "Awesome" was the word one kid used to describe my drawing of him! Who doesn't like accolade?! I just lapped it up and basked in it!
I threw in a bit of Geography, showed them where Greece was and then started the story. Std 4 was familiar with the story of Hercules and they had many questions to ask, lots of information to share. They knew that Athena was the Goddess of wisdom, etc
Thanks to Harry Potter, children could guess how Perseus cut the Medusa head. Comparing it to the Basilisk, one or two of them shared the mirror idea. Perseus sees the reflection of the Medusa on the polished mirror like shield and then beheads her. If she does see him he will be turned to stone.
So my journey with stories continues, now I have to find a new story every week. I just love it.
Check out my props.
Posted by SoulSpace at 8:57 PM 1 comment: Links to this post

Email ThisBlogThis!Share to TwitterShare to FacebookShare to Pinterest
Labels: Stories to tell

You must be wondering why, I'm weighing such heavy thoughts in my mind. It is stream which was activated by an article that I read in The Hindu, by Usha Jesudasen. She asks us how we practice Ahimsa at home, and goes on to say that Ahimsa is not some deep philosophy but is a way of life and asks us to examine our lives to see if we do practice it. She says it is not about renunciation, it is about sharing and caring.
I quite agree with her.
Ahimsa is non-violence in thought and action. In these times when there is such cut throat competition and violence you may think I'm anachronistic. Violence and aggression is an animal instinct. In fact the smile is a grimace of aggression that slowly evolved into this expression of recognition. I digress...Coming back to Ahimsa, I think we can learn from children. I remember my son was taking part in a running race during an event organized in our apartment. He had to run to a point, put on a T-shirt and then run back to the starting point. He was very much in the lead, and quickly wore his shirt and on completing it, had to see how his friend was faring, and found him struggling. My son immediately ran up to him and helped him wear the shirt, held his hand and came back to the start. He got a standing ovation, he was the real winner in all our eyes. He was just 3.
I 'm sure years of living will change him in due course of time....sad!
Himsa for me is even thoughts of negativity that we nurture in us, judgments we pass on people without considering the circumstances. Am I being too naive, I ask myself, but contempt and negativity breeds the same, while positive thought can create wonders and change even the most hopeless situation or person. I know.
The worse a person is treated the worse will he think and treat the world. Postive action and thought is Ahimsa. It is not about self sacrifice ( that Gandhi expostulated) but it is a postive attitude that we need to wear on our sleeves.
A simple idea that you and I can uphold in our daily lives. If we could only accept people as they are, understand the circumstances of their action and not judge them then we are truly on the path of Ahimsa.
Posted by SoulSpace at 6:46 PM 4 comments: Links to this post

I was approached to do a book review at the book festival by a start up company. They do online publishing; authors publish themselves with the help of the company. New and raring to go. Concept is great; we have so many aspiring authors with no platform to launch them. This company will realise the dreams of many an amateur author.

Coming to the event, it was the launch of the company name and some select books at the Bangalore Book Festival. They (the directors) soon realised that verbal acquiescence is no guarantee that your request will be carried out. The Festival organisers had promised them a place to launch their company and their books. But on that day, feigned ignorance!! So, this found one of the directors running from pillar to post looking for a place to set up the books and paraphernalia. Finally, the aisle which led from the entrance to the inside was given, 2 rusty tables were set up, and torn (serious, not jesting!), so called, white piece of cloth was spread over the tables. A cordless mic was handed over to our people and we were on the roll!

The chief guest is quite famous in the blogging circles, and blogs on IT related issues. The event was delayed by just half an hour, not bad by our IST (Indian standard time!)

The books were duly released, and then I had to take over. Well till now I have not mentioned the fiasco that was the acoustic system. It absolutely refused to convey any sound to the audience present. It took on the job of throwing our voice outside the tent, of the book festival arena. This was due to the fact that the mic was connected to speakers placed outside, so this ensured that people who were sitting just 2 feet away could hear …nothing, but staccato words, static, see some arm flailing, and sheepish grins. In spite of knowing that our audience could hear next to nothing, all of us continued with our charade.

Unfortunately I had to inflict myself on the audience for the longest period, as I was not only to tell a story, but also was reviewing 4 books. God help me!! I desperately tried to get some responses from my audience, who were obviously clueless at times, wondering why I was pausing in between and staring at them expectantly. (Those were the points where I was trying to pose questions to my audience and interact with them!). Hilarious in retrospect. I gave up after some time, did a rush job on the review and closed up the discussion.

I need to equip myself with a personal acoustic system; otherwise I will continue to face such noisome problems!
Posted by SoulSpace at 8:07 AM No comments: Links to this post