To the one who surprised me!

The best mistake I made was to conceive a second time. 'Too soon' is what I said as I sat shedding tears of self pity in front of the gynae. ‘Hmm, better now than never’ said my Gynae quite unsympathetically. So he was born in August 2003. Apparently on the delivery table, in a daze of pain I shouted out I wanted to name him after Krishna the divine soul...how clichéd is all I have to say now, yet a perfect fit for my dear sonny boy Keshav.
His father saw him after 5 months (he did manage to come for the delivery but couldn’t stay too long). By which time the puny boy of 3.3 kgs had bloated into a 5kg boxer. Adventures abound in Jorhat, having swallowed a cockroach egg while crawling about and drank powdered milk that tore his insides; we made a super stay over at the Airforce Hospital with dysentery! The doctors then proclaimed he had an enlarged head and I worried and fretted over that too, till my husband put a stop to that nonsense and reassured me every male in his family were enlarged that way too!
We returned to Besant Nagar for a stint in IIT Madras for the pater. Every morning one proud grandparent would carry the curious wide eyed boy for a stroll down Elliots beach road or just stand at the gate chatting and gossiping with the walkers. He ran and never walked, so his right eyebrow bears witness to two injuries that amounted to 6 stitches in all!! His words were anagrams of all that he wanted to say, Computer became “punkitoot” and lollipop was “illapop” and we watched with joy his antics many days.
He completed 3 years in Bangalore and we started preschool. First day of school he vomited all over the class floor and I got a call asking me to pick him up! That was the beginning of many days. Waking him up was really tough and then getting him ready...a herculean task! How we would chase each other over and under the bed!! Many songs to motivate him; many stories to goad him! Brush your teeth and clap your hands, Wheels of the bus, Old Macdonald, Karadi songs and rhymes to entertain him till he got into the bus. He was always the last to be dropped off whilst returning, and the little guy would fall asleep, then just as the reverse horn of the bus would sound, he would wake up and loudly shout ‘red right’, red right’!!
In no chronological order, but as the thoughts come to me, presenting to you Keshav, 15 years of childhood:
He grew so fast, through Karate lessons that he abandoned after his Dan 1 belt and tennis lessons that he still goes to. Learning to cycle like a pro and throw almonds up high to catch them in his mouth, to solve the Rubix cube all on his own, to sketching and doodling with passion, to talking like an express train and refusing to allow me to hug or kiss him. To taking guitar classes and dreaming of his own band someday, to collecting coins like an obsessed Shylock and being an out an out entertainer; learning to swim and keeping at it even though at one point he feared it so. He who is getting better at sitting and studying but reads his books hanging from the sofa, upside down! He who slept through a chaotic night when he locked himself inside the house and we had to break the door to get in! He played Holi with the tiniest of pitchkari, but really never whined for more! He with the kindest heart who stopped to help his friend in an obstacle race and refuses to squash even a tiny bug! He who is growing into a big boy with big thoughts; Happiest Birthday my dearest sonny boy. Happiness and good health to you always! 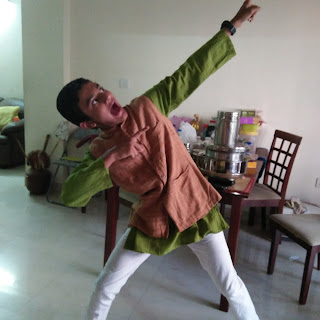 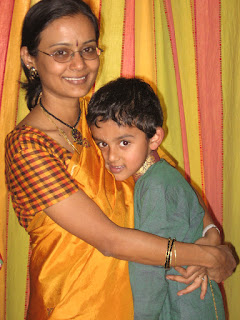 Posted by SoulSpace at 10:40 AM No comments: Links to this post