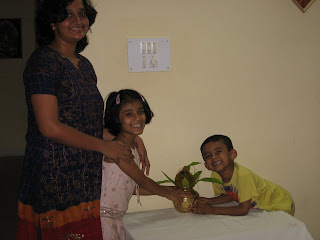 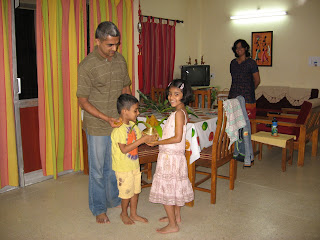 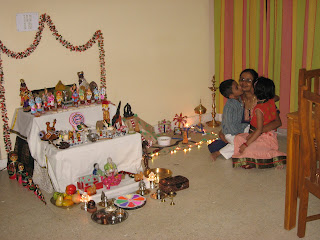 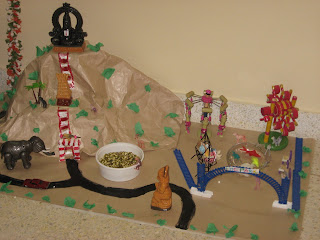 Today( 30th Sept.) marks the beginning of 10 days of celebrations for Hindus in India called Dussera. It overlaps with the Muslim festivities and austerities in the same holy month, called Ramzan.
Every festival in India is associated with a story! That is the uniqueness of our collectivistic culture. Every festival is a reason for us to socialise, with neighbours with family and with friends. There is more, every region will have a different story to tell for the same festivities!! Some times the story remains the same but the embellishments will be unique to that area/region.
So also Dussehra/ Dussera ( pronounced as duh-seh-ra), also known as Navarathri (meaning 9 nights) has two stories associated with it.
In Northern India it is celebrated for the victory of the legendary king Rams' victory over the demon King of Lanka, Ravan (which is the story of Ramayan). In Southern India, the story associated is totally different. Here the 9 days marks the fight /battle between the Shakthi (female power) and the demon Mahishasur (buffalo-demon), and on the 10th day the demon is vanquished by the Shakthi.
Now the other unique aspect of this is that some Hindu families also display dolls ( just like the Japanese), made of mud and terracotta, wood and other materials. These dolls portray our gods, life around us, animals etc. Here too stories are depicted, usually taken from the Ramayana, Mahabharatha, Puranas.
Stories are an integral part of our lives, and this festival reiterates this aspect for me. I share these stories with my children and those who I invite into the house to see our dolls. Though I have lived with these stories all my life, only now as a storyteller I realise how our culture has chosen to weave them into the very thread of our lives!!

(Last Navarathri, my friend Priyanka and I did a stick puppet show with this story. The stick puppets can be viewed on one of my previous posts, Puppets on Display.)

If you have had the patience to come this far, I believe you and I share a similar passion for stories!!!....
Posted by SoulSpace at 2:54 AM 1 comment: Links to this post

Three pairs of eyes follow me as I walk down the road lined with trees,
Three pairs of eyes, with innocence, follow me as I walk down the road lined with trees.
Each a copy of the other, of varying heights though.
The eldest pair of eyes walks with a smile on her face,
The second with a grim one,
The youngest has no walking to do as he is of the princely age of carriage!
My eyes follow them too,
As mother, daughters' and the little son in arms walk the road lined with trees.
Where do they go every morning? I wonder.
Such a picture they make.
The eldest in front, mother and son behind, and the straggling second,
Goaded by the elder to hurry up.
Neatly kept, they are always well dressed, little son with socks and scarf,
Daughters with skirt and top one day, a salwar on another, hair combed and braided.
Where do they go every day?
So tiny they are, like miniature soldiers, they follow in perfect discipline.
Marching one behind the other, or the other behind one, down the road lined with trees.
I look at them and give a smile, the eldest always has one to share,
The middle is too worried to look at me, as she has the catching up to do with mummy.
We move in two opposite directions, for our lives will not meet, but we follow each other with eyes of curious innocence
All the way down the road lined with trees.
Posted by SoulSpace at 1:29 AM 4 comments: Links to this post

Email ThisBlogThis!Share to TwitterShare to FacebookShare to Pinterest
Labels: poem

Another chance to tell a story and I grabbed it, of course this time I was thrust into it. The ladies club wanted a story. With humour, a little about the air force, and a farewell note as well, said the senior lady who approached me. Tall order. A challenge, as I have not told a story to an adult crowd before.
The first point, of course, is: what story?
So that saw me searching and searching and searching... No luck! Desperate now, I came up with my humour (corny) but then we can only laugh at ourselves. So I thought of conferring a degree and an award on the ladies! The degree of the triple "B", and the AVSM.
Whats that? Triple B is awarded for having the Beauty, Brain and Brawn. Ladies in the air force are known for their beauty(ahem!!), and Brain, where else do we need to dish out 5 star fare at dabba rates (that's what I hear from my husband so often!). Didn't get that? That needs explanation: you see we ladies plan the ladies club parties, every second month and for that the hostess group is given a stupendous sum of (hold your breathe) Rs.1200/-. This has to cater for our food, games and gifts. So we really have to exercise those white muscles! The last category is one close to my heart, Brawn. No where else( as packers and movers is a relatively new concept in our forces), will you see the lady, having to go through periodic upheavals, where she has to sort, pack , supervise loading, unloading, unpacking and arranging all their "samaan" almost single handedly as hubby dear does his handing over /taking over ritual!! That's the joy of belonging to the armed forces!!
AVSM was conferred on the ladies for being Awesomely Versatile Superwomen of the Air force!
Where is the story , you'll ask. I'm coming to that. It was the last night before the "Talk", and I still didn't have a story. I was still browsing desperately, when a brain wave struck. The story I was looking for was with me all this while. I unearthed it.
A wonderful tale of friendship, bonding and farewell. The story of the Mountain and the Bird by Alice McFerran, told to us at one of the sessions during my storytelling course.
I wove the tale around them and the magic of the evening was captured by my story!
I enjoyed telling them and they too, enjoyed listening. After all a story is told for the listeners to be enthralled.
Once more a satisfied storyteller!
Posted by SoulSpace at 12:52 AM 2 comments: Links to this post