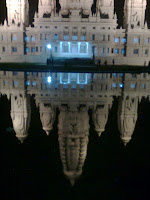 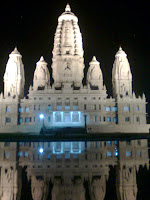 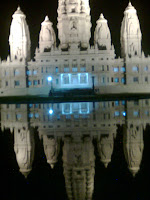 Sunday was a day to relax, the next day being Dasami was an off day for my husband. So I could be rest assured he would be more relaxed. Translate that as: I become hyper! I have to plan an outing, can't loose this opportunity, and there is much to see in Kanpur. It is the place where the 1857 mutiny happened and it is quite historic.

Yet the place we decided to go, read that as I decided to go, was the JK temple, also the Radhakrishna Temple in the city centre. Built by the JK Singhania's of the Tyre fame. The pictures looked quite beautiful, and since these are auspicious days, I thought starting off our sightseeing sprees with a temple is a good idea!!

Its a long drive from the airforce station, at Chakeri, off course in India it is not the distance that is actually relevant, but the traffic. I knew we were heading to the city on a Sunday and and on an extended weekend. I anticipated traffic, and we got it. Loads of it...
Here in Kanpur there are 3 ways of reacting to traffic lights:
1) Don't look at it,ignore that thing which is flashing on it's pedestal, just follow the guy on the bike/car in front of yu...
2) Move when the light turns red...
3) Traffic lights/vehicles are to be treated as non existent... Drivers, even those with heavy Safari/Tata Sumo's weave through any given space , squeeze through, regardless of whether they are heading into oncoming traffic. Their only aim is to get to the destination...(god knows, it's sheer luck that people actually reach places this way in one piece)

Since we did not know the actually location and were going by the map, it was slow and a painful process. More for hubby than me, I just gave him moral and verbal support, and kept the kids down!
It's not easy, there were hardly any directions to reach such a famous place and we had to constantly stop and ask.
Yet once we reached the temple, I realised it was not too complicated a route, and I guess people take this location so much for granted, there are no signboards for it. (Typical don't you think?)
The temple looms large over the rest of the buildings and its grandeur is a sure eye catcher.We saw the temple, prayed and returned. As we were walking back, it was my daughter who showed us, how the reflection of the building was mirrored on the artificial lake in front of it.

Then, the beauty of the place struck me. Yes, staring into the depths of that water, seeing the temple reflected there it was mesmerizing.
Dark star studded skies, a majestic structure, and beauty in reflection.
We stood there in front of the temple soaking in the beauty.

I thanked my daughter for showing me something I would have just passed by, and I thanked her for being so aware. It is this awareness that I lack and this trip made me reflect on it. So many times in my life, I have just not been observant enough and later regretted my inability to live that moment. We pass through so many incidents, events, moments, and we don't give a thought about it.

The monument was so symbolic of this reflection that I lacked. I came away thoughtful and aware.
On a physical aspect, the temple reflected in the water is awesome to behold, as we stare in to the depths, it feels like we are actually moving through Space, the infinite universe.
Is that why this form of construction was adopted by the Mughals?
Though I have not seen the Taj Mahal, hubby tells me one can get the same feel when we see that beauty in stone reflected in the water.

On a spiritual plane, I felt the reflection was urging me to reflect on my own action and thoughts. How often I have gone through life without giving any heed to what the moment was telling me, without listening to the inner voice. Fear and inhibitions cloud one's ability to reflect. The clarity of the water in which the building was mirrored was showing me how important it is for a person to reflect, to have clarity in thought,and to follow one's thoughts with congruent actions....

An ordinary temple visit became an important lesson in life for me...
Posted by SoulSpace at 8:12 PM

Email ThisBlogThis!Share to TwitterShare to FacebookShare to Pinterest
Labels: on Life and Learning, reflections