Stories from a Farm! 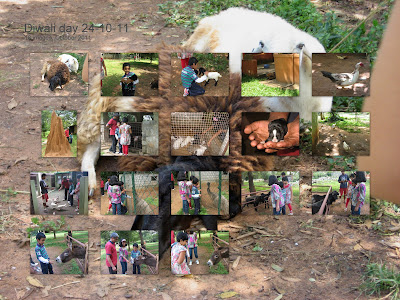 So I finally got down to putting together these pictures, taken from our trip to Gerry Martin Farm.
Saturday is a working day as children  go to school, and of course I go to the Library. So when we did get off on a weekday (being Diwali), I packed ourselves off to a farm.
Yes I did get the "what a crazy way to spend Diwali" undercurrents from family...but not in as many words. Plus "why are you not celebrating" from the same
...but we did...
Just Differently!!
In any case getting up early, having an oil bath before dawn and bursting crackers has just flown out of my household (I have stopped fighting it). Getting kids to wake up on a cosy weekday morning to have an early pre-dawn bath is absolutely impossible (unless there are a whole bunch of enthu-cutlets like my family members spending/celebrating with us). Add to that my partner and fellow-ditcher (who is usually up by 4.30am), who promptly turns around and chooses to snuggle into the blankets, just to mark his lack of interest in rituals such as these (an agnostic, that's why)!

So I decided that I would have them all out, rather than have them do nothing but warm their behinds on the couch and in front of the telly, watching Diwali Super Hit programmes on PoGo or Disney!

So there I was herding my cattle into the car, having taken that extra effort to pack a picnic lunch (Pav-Bhaji/Pulao/CurdRice); and to throw in a friend's daughter for company, we all drove down to Martin farm on Diwali Day!

Unexpected to see my son enjoy it as much. He was thrilled to carry the baby (goat), to feed the donkey and rabbits, stare at the gerbils, pigs and ducks.

The ducks waddled by, and seeing how they really all march out in a line and back was very amusing to me (I never thought it was some kind of group behavior of theirs!). Feeding beans to the ducks was funny too, as the ducks couldn't manage a whole bean and had to be fed small itsy pieces. When they were given a whole bean, the poor things pecked and poked, but could not get it in!

The Emu was an interesting addition, while the the tiny baby rabbit was surely the star. They were probably a day or 2 old and we didn't touch them in case they carried the scent.

A gigantic ant hill stood on the way to the tank, which had some turtles floating in it. The farm hand (an affectionate chap), invited the kids to join the summer camp next year where he promised to let them swim in the same tank with the turtles!!

A little hope I had that all this would endear my kids to take on nature camping/adventuring, crashed down, as my son looked aghast at that thought! While the female offspring delicately kept her hands to herself and refused to touch even the cute Kid lopping around its mother there....

But we did have that picnic lunch there,swung around for some time, played cricket and came back home just in time for evening music class!!

Only wish unfulfilled was their desire to milk a cow...and frankly that's how all this started (we were watching and talking about milking cows, farms..etc..)

Posted by SoulSpace at 9:12 AM No comments: 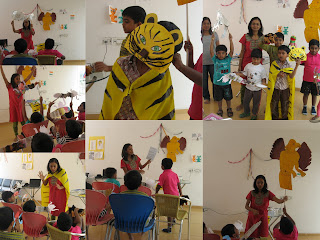 Children's day Story at Brainvilla library, amidst dragons, tigers, dancing lions and a gigantic Garuda.
Iliana's Quest ( Audio story) that I got from the net. The props got more affection than the story of course!

It always makes me wonder how we as adults appreciate that age of innocence (not any more), only much later.
One child who couldnt make it for the story, dropped by the library that evening and pestered me for the story. Even though I showed my (mock) displeasure, as she had not joined us that morning,I was quite happy to give her the brief outline...happy that this time it was the story and not the craft!

Imaginative tale of adventure, discovery, happiness, and sense of wonder and imagination...even if one child chooses not to loose this in the future, I will be delighted.