When we undertake an activity for the sheer pleasure of engagement, then the results we get are un-measurable.

With those profound words, I take you to view some pictures; 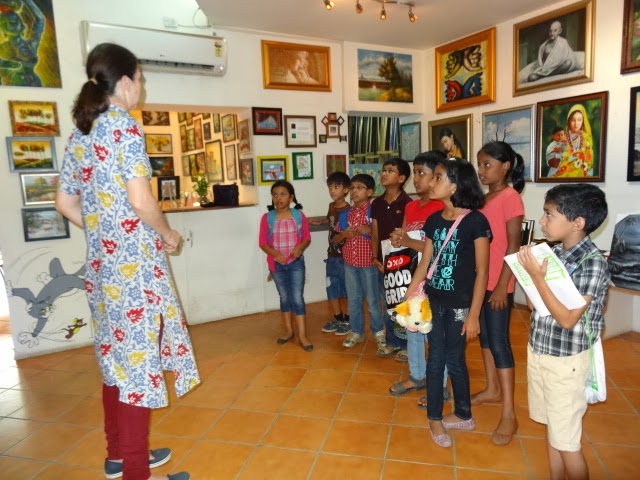 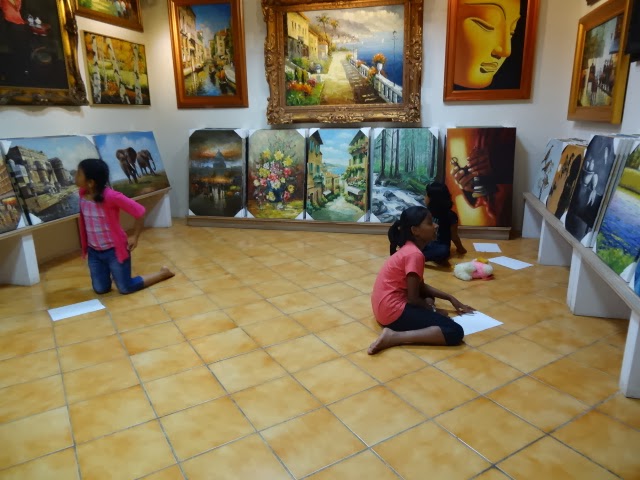 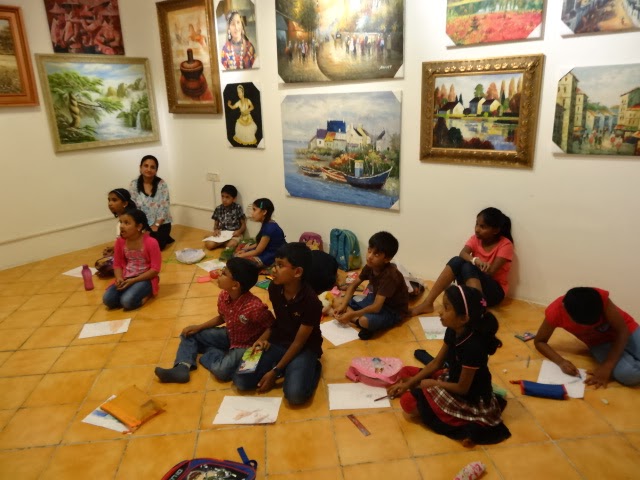 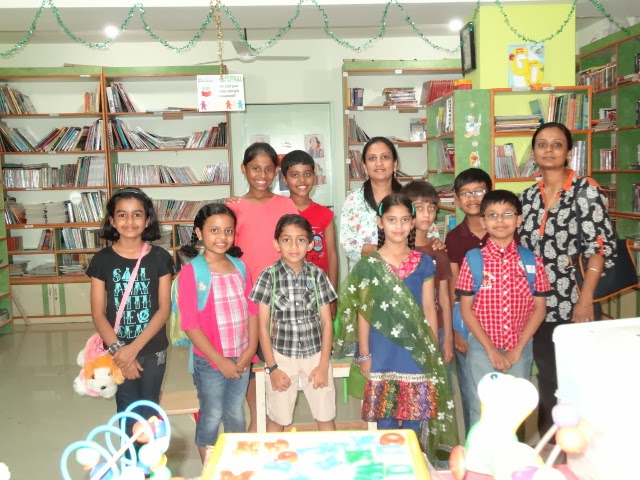 The Book Club I facilitate at Think Box library, is always looking for things to do differently.
Last year we visited a Printing Press and had a collection of articles/ drawings by the club members published into a book.

This year I really wanted to showcase how illustration and visual images,,can inspire story creation and vice-versa. The options were to interview illustrators, that is, have someone talk about book illustrations or to take them to an Art Gallery to just experience Art in its real sense. This could inspire the children we thought (Bhakti Shah of Think Box is a great support and in fact drives many of these activities).

Mails flew back and forth as we tried to find an Art Gallery for kids, that would support us, as we were looking at taking 11 really enthusiastic children on a trip to view a Art Gallery/Shop...the Paintings/ Art work had to survive that, and of course the management must be supportive of such lateral thinking.

Cruising down 100 feet road I just parked my car and entered an Art Shop/ Gallery which really looked vibrant from outside. Streisands Art it said. I was hesitant to ask permission. The Shop was a visual treat, at first glance i could see that. Every inch covered with paintings, mostly oil.

A Volunteer at Streisand, she was a delight and went on to explain how Streisands supports such activities and awareness building with children, was also a platform for upcoming artists, and was  providing art at an affordable price. She also explained their social angle, where they provide training and personal development for underprivileged through their foundation.

11 excited children visited Streisands on February 17th. It appeared as if they were in a magic cave, they oohed and aahed over the paintings. Some realistic, some abstract. Yet what was fascinating to watch was that the children had great questions to ask, right from how do you conserve to what is the cost of the paintings!

Leda was simply superb, as she clearly explained different styles, modern, impressionist, real, contemporary, and abstract. She showed a reproduction of  Van Gogh's sunflower; had children touch and feel the texture of the paintings, some smooth, some rough, depending on how the paint had been used. She showed a reproduction of Raja Ravi Varma's painting, and many more.

(The Streisands Art catalogue can be viewed here. Streisand is on 100 feet road, just opposite Sony Shop)

The Book Club Members just soaked it up. I followed this up by asking them to choose a painting and reproduce it, as well as they could. The task remaining for them is to come back for next month's book club with a Story or some thoughts about the picture they had chosen.

Posted by SoulSpace at 9:02 AM No comments:

January arrived on a Jet plane and took off on a rocket! Where did it go?

Celebrating the birth of the constitution and the countries pride at being by, of and for the public...here is a tale that appeared in Open Sesame edition of DH in 2004.

I found it simply hilarious and so very well written. I was in fact looking for quirky stories around the Freedom struggle and this is what I got

The diary of Gandhi's goat
KAVITHA MANDANA takes you through the pages of a very special historic diary!

History has been unfair to me, and it’s time I take my rightful place in the story of our freedom struggle. I come from an illustrious family. It was my grandmother whom Kasturba Gandhi picked to provide goat’s milk for Gandhiji when he fell seriously ill at Bombay in 1918. Gandhiji had refused cow’s milk because cows were ill-treated in the process of milk-extraction. So it was goat’s milk that brought the Father of the Nation, back from the brink of death. Isn’t it then appropriate that a grateful nation write a few chapters about OUR role in the Independence Struggle?! I mean, this is totally unfair. There was Napoleon’s horse, Marengo. He was the horse that Napoleon rode in his final DEFEAT at Waterloo! And still there are books written about this ‘fabulous, white, Arab stallion’.(True, Marengo was ridden by Napoleon through a number of victories too.)

And then there’s Alexander’s horse Bucephalus that irritates me. The silly creature was petrified of his own shadow!!! And he still managed to get written about. The horse was so unstable, that King Phillip lost his temper with the person who’d gifted it to him. The king’s son, 12-year-old Alexander had watched his father ride, and realized the horse had been startled by his own shadow. So he rode it so the horse’s shadow fell behind him. Alexander named this horse Bucepalus-it means ‘bull faced’. And this brave warrior rode the ‘scared-of-his-own-shadow’ horse for thousands of mile across Asia. The part that makes me positively sick is that when Bucephalus died, Alexander wept! He was buried somewhere in what is now Pakistan and a town was named Bucepala, (today called Jhelum) after him.

Well, if travelling thousands of miles with a world leader gets you written about - I’ve earned my right to fame. It was I who accompanied Gandhiji from Bombay as he sailed to London for the 2nd Round Table Conference in 1931. Sarojini Naidu and a whole entourage of Gandhi’s followers were there. But I must be the only goat in history, who traveled months, from a warm country like India to cold London. And don’t for a moment think that we lived a life of luxury. Gandhiji insisted that only the worst facilities would do! We lived on the lowest deck of the S.S. Rajputana. Gandhiji was furious with those of his group who’d carried too much of luggage and had it sent it back to India when we reached Aden, at the mouth of the Persian Gulf!

I remember times when, I Gandhiji’s goat, was treated like royalty. There was one trip to Kashmir. We were the guests of the Royal Family. And the young Karan Singh insisted the warden of the family’s forests pick wild tulasi for me! It was one of the most delicious meals I’d ever been served. But on the S.S Rajputana, I was sick. A ship, tossed by a violent sea, is no place for a goat!

We stopped at Egypt, and it was here that I was rudely insulted. Gandhiji’s trip to the Round Table Conference was to discuss India’s independence. So the world’s press covered the journey. A goat in such illustrious company seemed to excite journalists and my photograph appeared in newspapers across the world. So when we did dock at Egypt, I was outraged when local dignitaries came aboard to pay their respects to Gandhiji - carrying a large bowl of goat’s milk!!! Did they think I wasn’t doing my job? Or that Egyptian goats produced better milk? The world KNEW that Gandhiji was with his goat! Out of loyalty to me, I expected Gandhiji to refuse the offering, but he didn’t. In fact, he spent a lot of time with the Egyptians, discussing freedom. And even tried a sip or two of their milk!

In London, things got worse. A London autumn is pure torture to an Indian goat. And while all other Indian delegates to the Conference stayed at fancy, well-heated hotels, Gandhiji, naturally picked the worst accommodation. He chose to stay at London’s East End, the poorest quarter, 8 kms away from St. James Palace where the Conference was to be. I shivered through those cold days at Kingsley Hall on Powis Road, vowing to tell my daughters that serving Gandhiji was all very fine, but not in London! Maybe it was time for goats from our family to return to the hills of India.

From Gandhiji’s point of view, the Conference was a failure. The British wanted to break up India into separate Hindu, Muslim and Dalit electorates. Just a continuation of their old policy to divide and rule. But unfortunately, I could only think of returning to warm India. I had seen enough pictures of myself in the papers. The hay available in London tasted of soot. And I longed for some wild tulasi from Kashmir’s Dachigam forest!

Once we set sail back to India, my spirits rose. I had got used to the pitching and rolling of the ship. My only worry was the Egyptians. I had gone through too much to deal with another insult on the way back. Luckily for me, When the S.S Rajputana docked at Suez, the Egyptian authorities, under pressure from the British, banned anybody from meeting Gandhiji! So no milk of an Egyptian goat was allowed in my presence!!!

I am sure you would have enjoyed it. So do send me your thoughts and leave your comments here on the blog.

This anecdote is great to Tell as a storyteller too.

~"Meaning is in every moment of Living"~

Here I am telling this anecdote at our monthly meeting of Bangalore Storytelling Society Meetup on January 26th 2014 at Atta Galatta; a wonderful space which is available to us every month. 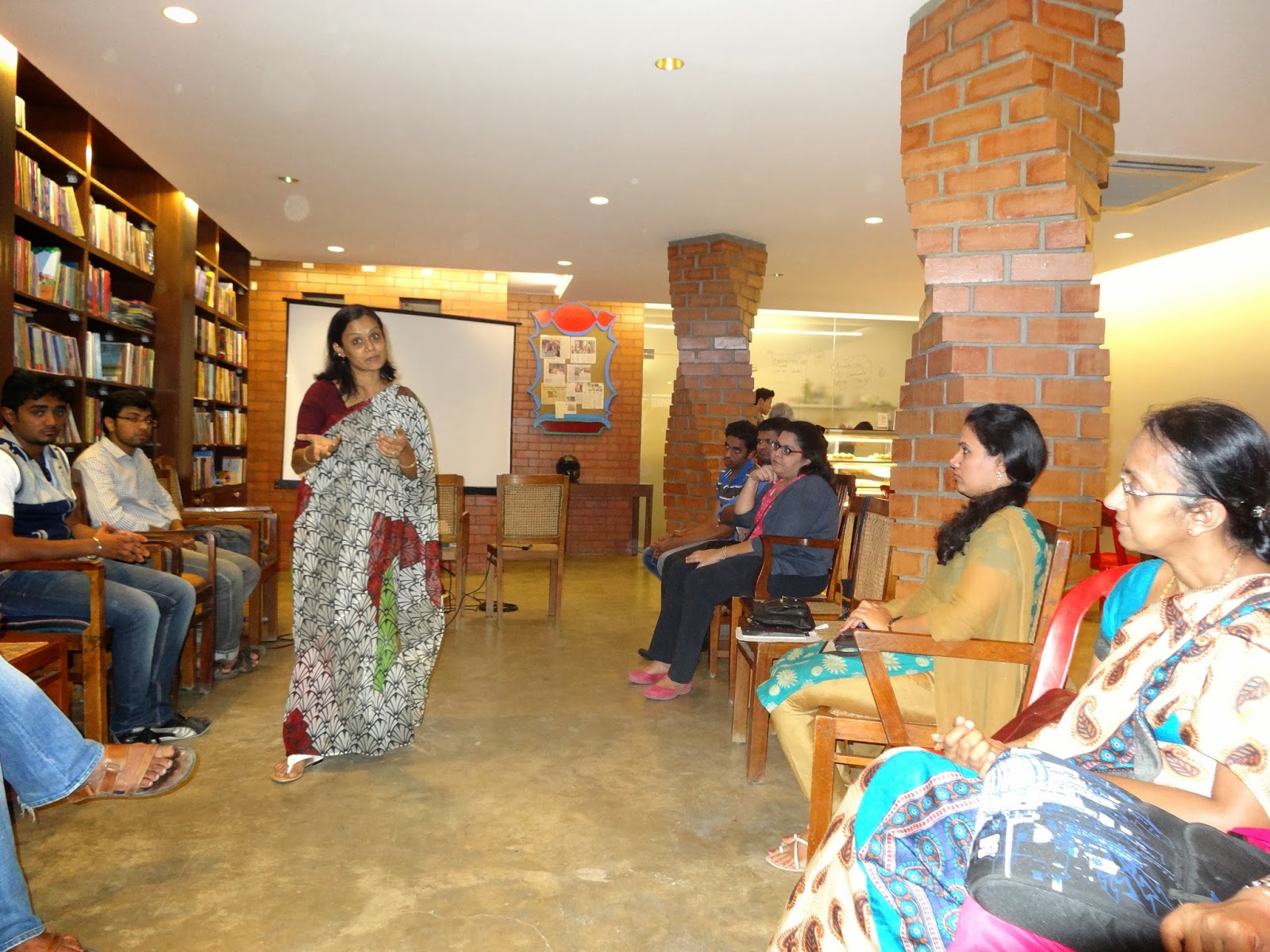 Sowmya
Posted by SoulSpace at 9:25 AM No comments: