1.
Citizenship - To strive towards excellence in all spheres of individual and collective activity.  Civic strengths that underlie healthy community life

Story is suitable for children above 7 years. Some parts can be edited out as is required by your audience. 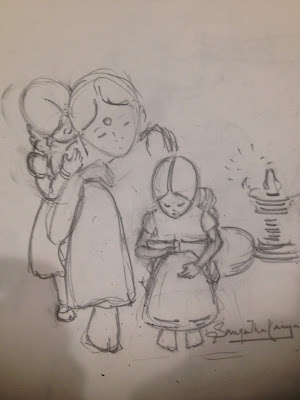 (pencil sketch by Sangeeta Kamath - inspired by the story!)


Hear the story by clicking on this sound cloud link:
https://soundcloud.com/sowmya-12/stories-for-citizenship-savitribhai-phule

Go, Get Education
Be self-reliant, be industrious
Work, gather wisdom and riches,
All gets lost without knowledge
We become animal without wisdom,
Sit idle no more, go, get education
End misery of the oppressed and forsaken,
You’ve got a golden chance to learn
So learn and break the chains of caste.
Throw away the Brahman’s scriptures fast.
— Poem by Savitribai Phule

This is a poem written by my Guru, my teacher and you can even say someone I considered as dear as my mother.
I am Mukta and I am 14 years old, I belong to the Matang community of Maharashtra. My community was considered very backward and no one thought that we should go to school, study or even learn.  I was lucky that my dear teacher Savitribai broke this thinking and stepped out of her house along with her husband Sri Jyotirao Phule and started a school for us in the year 1851. I was one of the first students to join, we were just 8 of us at the beginning but soon this increased as more girls joined the school and we were soon more than 48 students!

But I must tell you it was not easy for my dear teacher. She herself was taught English & Marathi by her husband secretly, because if anyone came to know that a girl was studying then she would get thrashed. But my teacher’s husband was a wonderful man who believed improvement in a child comes through the mother and a country will progress only when women are educated.

When she got married and came to Jyotiba’s house she had brought a book along with her, and seeing her interest in reading he started teaching her. She was 9 years and he was 13 years! Soon Jyotiba (Tatya as we called him) told his father that his wife could read and write, but they were just thrown out of the house for this reason.

But Jyotiba did not fear, he trained my dear Savitribai to become a teacher (she was just 18 years and the first Indian Woman teacher) and they started a school for the Dalits ( Mahars and Mangs) and especially enrolled the girls who till then were treated worse than animals. Oh Yes. You may be surprised I am using such a strong word. But we Dalits were treated very badly by the so called upper class Brahmans who kept us to do all the very dirty work and believed we were not intelligent enough to study.

But we proved them wrong; in our first board exam that was held a few months after the school started, we passed all our papers with flying colours. In fact our mothers used to complain to the Headmistress that we were always studying late into the night.
I remember one of my little friends even got a prize for getting top marks and when she went to collect the prize she boldly asked the Chief Guest not to give her any gifts of toys and goodies  but to give the school a library of books!*

Not only did Savitribai Aai (ma) teach us, she guided us in many other ways also. She was so upset with the way Brahmin widows were being treated, that she opened an orphanage for pregnant and widowed women in her own home in Pune and started taking care of them and the babies that were born. We called it the “Home for the prevention of Infanticide”. If you knew how these poor women were treated you will feel lucky to be born at a time when such things are banned.

The purpose of education according to Savitraibai Aai was to give us the ability to know the difference between right & wrong and make the right choice between truth & untruth.
So I too decided to voice my opinion on what I thought was wrong, I wrote an essay in Marathi in which I spoke strongly about the laddukhau (laddu eating) Brahmins and questioned God on his unfair practise of allowing only some people to read the Vedas. I asked God what religion I should follow to be allowed to read the Vedas (as the Brahmins were not allowing us). The Editor of Dyanodaya newspaper was so impressed with my strong essay, he even published it. I was thrilled and decided I will continue to speak up about equal rights and human rights from then on.

Poor Savitribai Aai, she was not even getting paid salary for her work, but she continued her teaching as she considered it her sacred task. That is not all, sometimes small minded men would be waiting around corners or at the street end and throw cow dung, mud and stones at her. But she did not bat an eyelid, and continued her work with determination and courage, keeping two sarees in the school, so that she could change out of her soiled saree. Can you imagine being treated like this almost every day?!

She was  compassionate, calm and so giving! She would cook for anyone who went home, and even give away clothes and things for those who went to her, saying “What am I going to take with me, when I am gone”.  Watching Savitribai Aai and Tatya talk to each other was delightful. So much of respect and love, I was in awe of them and their relationship.
Savitribai ma also gifted me a collection of her poems called Kavya Phule that has forty one poems written in Marathi about social issues, nature and history. I keep this with me as my most prized possession.

Everybody knows about Rani Lakshmi bhai of Jhansi but not many know of my dear beloved Savitribai Phule of Pune.  She is my role model, who showed me that education is most important for all regardless of caste, community or economic status and gender and that everyone must learn to stand up for themselves. She is a true Citizen of this nation.


~ original story written by Sowmya Srinivasan. Please feel free to use the story. But please do give me some credit! Credit also the original texts;
facts collected from various sources:

1.       COURAGE – Emotional strengths that involve the exercise of will to accomplish goals in the face of opposition, external or internal


• Bravery [valor]: Not shrinking from threat, challenge, difficulty, or pain; speaking up for what is right even if there is opposition; acting on convictions even if unpopular; includes physical bravery but is not limited to it
copy write - VIA 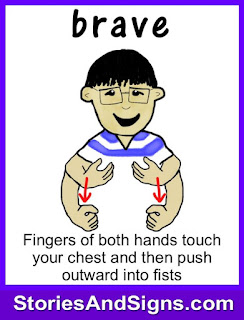 I have not used the word Fearless / Intrepid which means that fear doesn't exist in a person. I believe Being Brave implies overcoming fear and not a lack of it.
Here being Brave implies a courage required not only to set out to do difficult tasks such as mountain climbing but it is also the same strength required to step into a new class.

You can listen to this story here:
https://soundcloud.com/sowmya-12/mohinibhasmasura-story-for-bravery

Song:
Jai Mohini Jai Jai
She never gave up
She kept on trying
Till Bhasmasuran was
Tricked into dying

Posted by SoulSpace at 11:11 PM No comments:

Welcome to a new muse for my Soul. Stories that act as triggers to talk about character strengths in children and us. Simple, yet profound. These stories have been told over the ages by many. But I aim to provide fresh perspective while telling them in this new space I have created.
Words are powerful tools for growth and stories create a garland of words that are strung together for us to wear and celebrate.
I am inspired by a Coursera Mooc that I did.
Here is a link if you are interested.

Character Strengths came out of a study by famous Wellness Psychologist Martin Seligman.  His journey through this is field comes with a legendary story. He invented the word Positive Psychology, but a question raised by one of his students on such a uni-dimensional nomenclature of happiness led to an entire new and larger, grander umbrella of study called Wellness Psychology.
He then went on to identify and classify the character strengths that one requires to lead a happy life. This has been the muse for many Teachers, Psychologists and Educationists who have taken his study into the classroom and work space.

The Character Strengths are broadly classified into 5

I will put together Stories and Vocabulary that will help develop these character strengths. The stories need to be told and a conversation, discussion, role play or active expression of thoughts post story to be facilitated.

Stories are sourced by me.These stories will be pan India - Asia as far as possible.
All information about Character Strengths is sourced from VIA

Posted by SoulSpace at 9:43 PM No comments: