My first Award and many thanks to Anu for nominating me.
Any Award makes One beam with Joy and Pride, and the First is always special...Thanks Anu

Then hey I spotted that Lav  has also given me an award..thanks once again.
I am happy and here's the award right back at you!!

Well the only problem is I could not figure out how to locate and paste the logo onto my post.
So help me ladies!!

I look at myself and this journey and I really amaze at how things change, convolute, contort and yet remain, funnily, the same!
I grew up in a suburban Chennai, and went to one of the most elitist schools that the city could boast of. We were an exclusive group, "privileged' is what we were called.
While growing up the difference in lifestyle between school and home was not something we really gave much thought to. But, yes as we reached High school, I would squirm at my grandparents and their old fashioned clothes or traditions. Trying not to reveal much of how we lived at home to school mates, while at the same time trying to fit into a very Yuppie, very westernized peer group. George Michael and Jeans were sacred words that I repeated to myself, trying to understand who and what they were!!
It appears in retrospect that I did myself a very good turn by changing schools for the 11th and 12th grade. I joined another school in order to score better marks, and my parents just went along with me, not having much of an opinion on this at that time. I did do better, and I now know I also did better for myself, as I got a chance to move around with friends who were more similar to me and my back ground than I realised at that time. Paving the way for my "unsnob-itising"!!
College is always a golden period, where one gets a chance to really explore and expand oneself. Again I see that, in retrospect, I moved away from belonging to the "privileged group", to being a face in the crowd, albeit one who wanted to make her mark (well I have always been that). But I was and saw that moving/being with people who were not as fortunate as me, in terms of having a wholesome family life, a very fortunate lifestyle, and generally being provided with whatever I wanted...meant...that they all had to struggle to make choices that would carry them a step ahead of where they already were.
But then I never had to face that, as I allready had what every one wanted!...So that meant wanting to do something that others would not try. Something different...
...So I joined Special Education. Working with special children is an experience in itself.
A whole new learning and period of self discovery, making me what I am now.

Marriage and children too add to the immense store of learning/unlearning...but thats not what triggered this post...this did:

As I stand in the school I have joined as a Spoken English Teacher, the same school my children go to, I think of the experiences my children are having as they now belong to the privileged group.
Their class mates are not as fortunate. Some are first generation learners, some whose parents work as peons/ janitors in my husband's office. I had so many inhibitions while choosing to place my children here. My husband has/had few.
It is my own elitist upbringing I know.
Yet, now as I teach the children, I realise that the need for such schools is so much more than the need for an elitist one. Where children from varied backgrounds learn together and hopefully learn from each other.
I feel sad when a 4th standard student tells me he cannot tell a word starting with the letter "D"(out of fear or inhibition maybe) but knowing that it is a challenge for me to make him move out of his fears and inhibitions (in speaking English), inspires me to find more ways to teach them, as they are truly needful.

My children will surely gain a wider perspective of life and the differences that exist amongst us all. Earlier than I realised it, at least.
Yet I hope that they realise too that having everything does not mean that they do not aspire for something else...
Life has truly been humbling to say the least...
Posted by SoulSpace at 3:56 AM 5 comments: 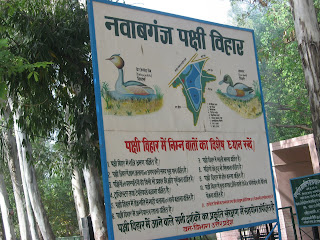 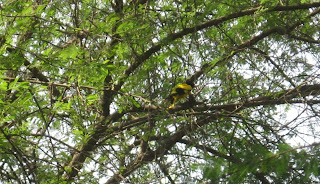 In this concrete world, if we get a chance to just get out and see some water, trees, and birds then we have to grab that opportunity.
Between Kanpur and Lucknow lies Nawabgunj Bird sanctuary and the best time to visit is between November and March.
We were a wee bit late having gone there in April. Yet we got to see around 24 different types of birds.
Having Not packed the Bird Book (we have many but I like Salim Ali's for its clear descriptions), we had to rely on my husband who is any way a walking Bird Book.
Somehow just spending 3 hours roaming around trying to spot birds and identify them through their calls, fulfills you, with a feeling of a day well spent.
It was a hot day, but the green foliage covered our path.

The monkeys though, gave my daughter some anxious moments.

The highlight was when we spotted the black headed Oriole. In fact we heard their call( my husband pointed it out) and then we tracked them around. Finally to our delight we spotted a pair swooping around the trees, as they were chasing away the crow...