A little experiment and I am glad I did it.
I was asked to show sign language at my daughter's school, which got extended to a small 40 minute programme on Disability and how children can help. I knew this was a group of 3rd, 4th and 5th std children and the best way would be ... through a story( I truly believe in the power of a story!!).
I Googled and as expected, got a wonderful story. Just the brief outline. But that was enough for me. I added relevant details and drama, and there was a tale for me to tell about a disabled Giraffe who is ridiculed and made the odd one out as he could not dance with his knobbly legs. He is then helped by his tiny friend, the Cricket, to come out with his own unique way to do a new dance, by choosing another song, a slow one. So the Giraffe creates the Swaying Dance!
The children really appreciated it, and what I could not have conveyed but just stating facts, I could convey through the story.
It is about using the abilities we have, instead of focusing on the disabilities that hamper us. So easy to tell, but difficult to execute. We have society to blame, but only partially. Half the responsibility falls on us too. If we do not always feel guilty about going away from the mainstream. Then we can also teach our children to make choices, that will make them and us happy.
Posted by SoulSpace at 12:00 AM 3 comments:

Email ThisBlogThis!Share to TwitterShare to FacebookShare to Pinterest
Labels: Stories to tell

My adventure with books

I started reading books very early, partially due to the fact that I had an elder sister who used to read a lot, and with a gap of only 1 year and 10 months, I was constantly trying to ape her, or do the exact opposite! My mother too used to read and I guess that could have contributed to this insatiable desire for reading. Of course I cannot deny the influence my school had on my reading habits. Starting with Kitty and Rover in LKG, Sishya school encouraged us (my sis and I), to read.
I still remember our library teacher,very strict, who used to get very annoyed if she saw us folding the corner of our books to keep the page! She would keep a track of who was reading which book and encouraged to read beyond our age if she saw fit. And I was Fit!!
No comics in our school library( at least I don't remember seeing them), only loads and loads of Enid Blyton, Roald Dahl, and I forget the author of The Lion, the Witch and the Wardrobe! I even remember my library teacher's name,Mrs.Unnikrishnan, she was diminutive in size but compensated with her glowering STARE. I now realize that it was a facade, otherwise we would never have taken her seriously, she was so small and cute!
There were tremendous phases in my reading. As sis did I followed, if not openly, Iwould do it surreptitiously. Enid Blyton was followed by, Nancy Drew, my favorite was Moonstone castle mystery. Then Hardy Boys, followed by Agatha Christy. In between you could see me with some Three Investigators (the old version was terrific, I never liked the later versions). Later, much later I started with PG Wodehouse.
Till now all pretty decent! Here comes the juicy parts. The Mills and Boon phase (cannot deny I was addicted at one point!). Its unbelievable, but it was my father who bought us our first Mills and Boon,(I even remember the name of this book,The Darling Jade!). Apparently he had picked it up in an airport lounge and just gave it to my sis on returning. We were hooked! He did not realize the consequence of his actions, I'm sure it was no big deal for him too.
We were members of this fungus ridden, ancient library called Venkateswara, and holidays saw us peddaling down to get some books.
I was about 12/13 years when I started with Mills and Boon. I used to read it on the sly, initially. I remember once I crept with the book upstairs, to our guest room, which was a cubby hole, with a bed, a mirror and thats all! I was reading with the door open so that if I heard anyone coming up the stairs, I could quickly hide the book. Well I didn't cater for being totally engrossed in the book, that I did not hear my sis coming up. When I saw her at the door, I just threw the book and ran from the room like a scared rabbit! Hilarious and even now I have a good laugh thinking of it.
Mills and Boon was followed by Temptations, very steamy I can tell you.This went on till college, and I know my mother was at her wits end to put a stop to it. She even threw these books from the top of our terrace, but that did not stop me!
I must grant that my parents had infinite patience and trust in us, as that phase too passed and we did not come out of it worse for wear. Probably one thing I can say is, that it has considerably infuenced my views on what is romance and the kind of romantic behaviour I expect from my husband( unrealistic you could say, especially if you knew my husband!!)
Now when I see my daughter going through a Tinkle and Suppandi phase, I recall my own Target phase. In fact it was a discussion on her liking for comics, and whether comics will inculcate good reading habits, that triggered off these thoughts on my blog.
Like me, I'm sure she will, explore, investigate and experiment with all kinds of books before she finds her likes and dislikes. I'm not so sure I can or will be as understanding and patient as my parents in this regard!!!
Posted by SoulSpace at 11:04 PM 3 comments:

Email ThisBlogThis!Share to TwitterShare to FacebookShare to Pinterest
Labels: Books and Reading 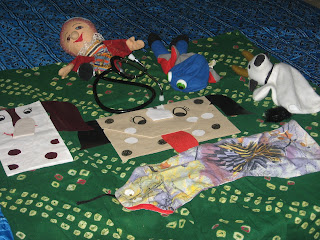 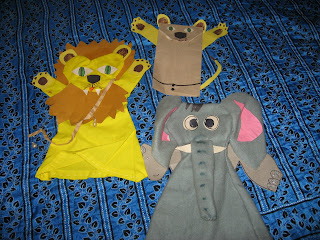 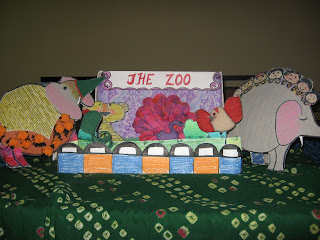 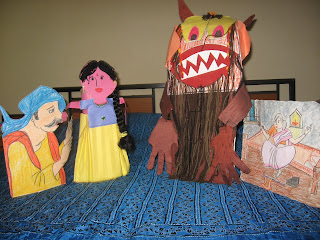 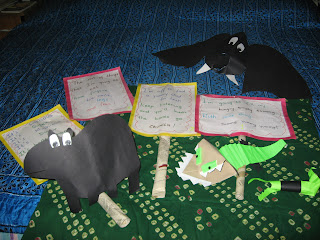 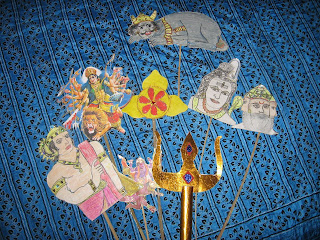 Here are some of my puppets for you all to see. As i had said earlier, I like working with paper. I am not much of a puppeteer and most of my puppets are used as props. The difference is that with puppets, they themselves play the role while the puppeteer takes the role behind, whereas i keep them with me as an illustrationwith me, mostly.
I love my story box for Rupa story, and know that it is a super hit. Bhasmasura is the big puppet, while Enormous croc., is a paper cover puppet. Simba is cloth and paper. Mahishasuramardhni is a stick puppet show( I thank my friend Priyanka without whom that story could not have been done.).
So enjoy and use your creative juices to come with wonderful stories.
Posted by SoulSpace at 11:15 PM 3 comments: