Round up of Events for September!

Loads happening and loads to tell! Though I would have liked to blog about each event separately. Too many things happening around me!
It so happens that in my excitement to capture the event, I have been busy behind the camera and forget to ask someone to capture me in front of it!

So here are more events and activities from Kid and Parent Foundation....

September 2/ 2013 : It all started with a wonderful event at a school in Indra Nagar, Bangalore, that was celebrating Maria Montessori's birth anniversary. They had requested us to present snippets from her life story to the children along with some fun, interactive stories. So we introduced the children to Karan and Pinky, 2 adorable brother and sister puppets, who shared Montessori Aunty's life with them, followed by 2 stories, Counting Lady Bug and MilkMan's Cow!

We had a blast ad so did the children 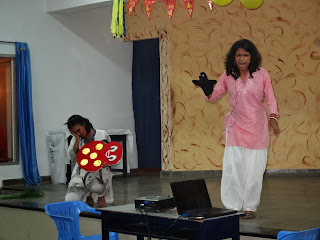 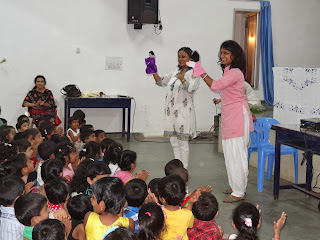 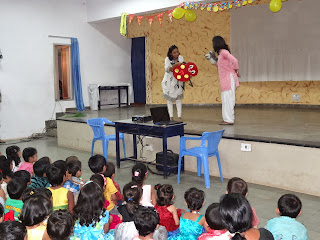 September 5/ 2013: Call for Champions: Pratham books annual storytelling feast for ears was happening and we joined up with EverAfter storytelling company to tell stories at Atta Galatta.
3 stories, 3 times the fun!!
We told Babloo Bear's Adventure, Grandfather fish and of course the hero of the event Paplu the Giant.
The children enjoyed all 3 stories and the evening wound down with a fun game called the Ulta Pulta  game conducted by Kid and Parent Foundation. Children went home with a drawing of their favorite story too. 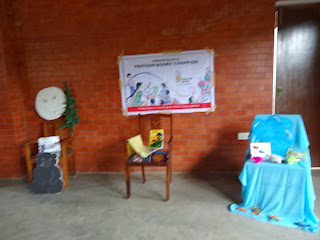 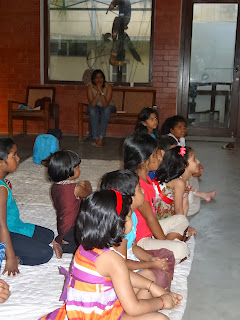 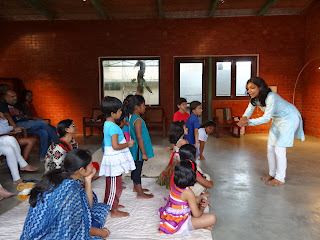 September 16/ 2013: We were back at Ananya Trust with stories and more.
This time we had only 2 groups, and I think this is best.  We told the story of Fish Friends 3. A wonderful tale of attitudes and problem solving.
Working with the story for the older group, we had the children identify how they approach a problem, whether they are given to looking at the larger picture or smaller details. Followed by a self awareness activity, where they understood how to look at problems and their attitudes to problem solving.
It appears that most of the group worried more about their problem before the event but were not as bothered by the success or failure of the event itself. We completed this session with a wonderful technique from Image theater, where we had them thinking about the word Hardwork and creating images for it. 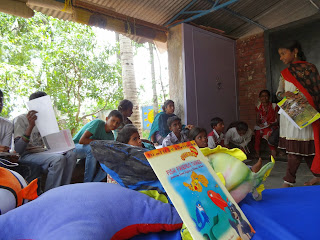 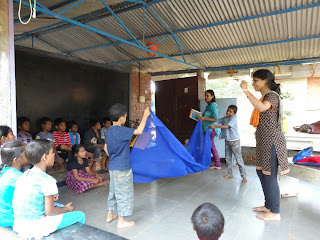 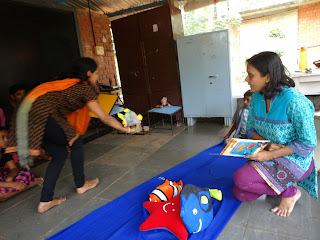 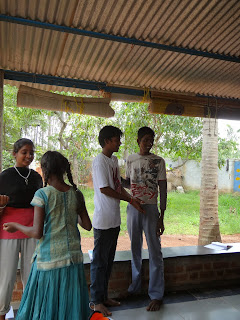 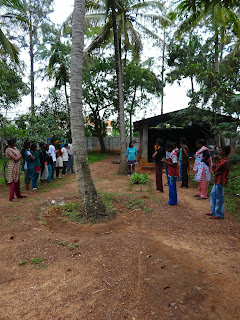 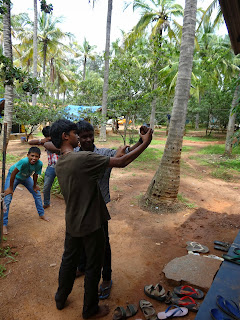 Posted by SoulSpace at 2:36 AM No comments:

The Myth of Cupid and Psyche

Here is another story that touched me.I generally keep browsing for stories, and particularly look for stories that can be performed. There is a difference. You see, there are many stories, that need to be read aloud from a book as the language of the text itself is so beautiful, while others sound nice being narrated at some opportune moment, like  a personal story, or a parable.

Stories that can be performed are a different league, not only does one need to relate with the characters, we also have to look at the flow of the story, in terms of the character's quest or search for some resolution. If you are a story writer, you will be well aware of how the story plot has to be carefully planned and characters sketches need to stand out for some unique reason or the other.

So browsing through my collection of stories for a story to tell at the monthly meeting of BSN (Bangalore Storytelling Network) at Atta Galatta, I saw I had saved the story of Cupid and Psyche. 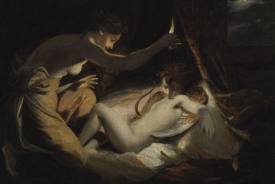 Ah! a Love story. Was my audience ready for it. I was not sure, but try I must.

So I did, and really enjoyed it and I am told so did my audience.

Here I share a shortened version of the story, taken from the book called Metamorphoses, or The Golden Ass (Asinus Aureus) by Latin writer Apuleius, who was a Numidian Berber during the Roman period. It is considered to be the only Latin novel to have survived in its entirety.
(~ reference Wikipedia~)

Psyche, the youngest daughter of a king, is considered the most beautiful mortal born. This makes the Goddess of Love, Venus (Aphrodite) extremely jealous. So she sends her son Cupid, to look for an unsuitable alliance for this maiden.  Yet one look at Psyche and Cupid falls in love and wants to claim her as his own, but knows his mother would not allow it. With the help of the Oracle at Apollo, he has Psyche flown in to his palace in the skies, by Zephyr the West wind (can you see similar story line from Indian Mythology?!). Scared Psyche is appeased when she realises she is loved and cared for by her husband/lover, yet the agreement between them is that, he would live with her at night and not during the day and she was not permitted to see him.Alas, the story turns here, for instigated by her sisters, she succumbs to the temptation to take a peek of her invisible Lover, in the light of a burning candle. The wax falls on the sleeping Cupid, whose angelic countenance makes her realise He is no mortal,but in fact the God of Love himself. yet the deed is done and Cupid leaves her, as he says"Love cannot exist where there is no Trust" .
The story goes on, to tell us how Venus now tests Psyche, by throwing different tasks at her and she passes all of them with help from different sources. One task is to cross the River Styx into Hell itself to collect some precious beauty from Proserpine, wife of Hades. Once again she succumbs to temptation, opens the cask which is supposed to hold the beauty and falls into the sleep of death. Finally she is rescued by Cupid, who frees himself from his mother and arrives to carry Psyche to higher authorities, to finally marry her and live in peace, to beget a daughter called Voluptas ....or Pleasure!


********
There are some beautiful Metaphors in this story. If you see Cupid as Love and Psyche as the Soul, then you can work out, how this story shows us that the Soul aspires for Love, but has to go through a number of tests before it is able to live with and to take ownership of Love.

On another angle, the Soul succumbs to temptation time and time again, loses trust, and if it wishes to regain Love, then the Soul has to let go of temptation...build trust.

I am sure we will have many such parallels in Indian Mythology as well. I leave you here to mull over the relationship between the Soul ( Psyche) and Love ( Cupid)...after all the two must marry if we want to walk the path of Happiness.

Posted by SoulSpace at 3:35 AM No comments: